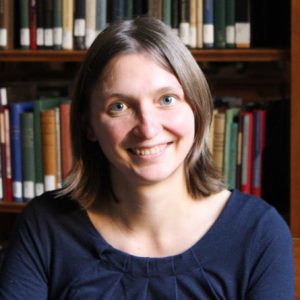 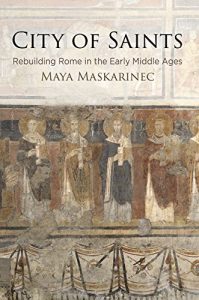 The Hagiography Society is delighted to announce that the winner of the 2019 Book Prize is Maya Maskarinec (University of Southern California; Department of History) for her monograph City of Saints: Rebuilding Rome in the Early Middle Ages (University of Pennsylvania Press, 2018). We warmly congratulate Prof. Maskarinec for this noteworthy achievement. We would also like to thank the panel of judges who generously shared their expertise to evaluate the books submitted for the prize. The scholars who served on the judging committee this year included E. Ann Matter, Professor of Religious Studies Emerita at the University of Pennsylvania; Carolyn Muessig, Professor of Medieval Religion at the University of Bristol; and Nancy Warren, Professor of English at Texas A&M University. Here is their statement regarding Prof. Maskarinec’s City of Saints: “This study of definitions of sanctity and the social implications of the veneration of saints in early medieval Rome is a tour de force in its analysis and re-imagining of both material and textual sources.  Through her focus on early medieval saints and how they were venerated in Rome, Maskarinec provides a careful synthesis of the physical, typological and religious elements of the city, tracing its assimilation and reconfiguration of different notions of sanctity from Byzantine influences to the later practices and customs of the Carolingians. The careful attention given to sources as diverse as literary hagiography, architectural, artistic, and political history is admirable. This book fulfils amply the remit of the HSBP in its expansive treatment of sources dealing with saints and sanctity as well as its deft analysis of the cultural and historical shifts that clarified the role saints and sanctity played in shaping the medieval imagination of western Europe.”

The Hagiography Society is delighted to announce that we have awarded the Sherry L. Reames Graduate Student Travel Award to Lacey Bonar (History, West Virginia University). She will present “Losing Face, Saving Grace: The Trope of Facial Disfigurement in Saints’ Lives” at the 2020 International Congress on Medieval Studies.

Named in honor of the beloved founder and long-time leader of the Society, the award now provides $500 to be used toward travel to present at the International Congress on Medieval Studies, held annually at Western Michigan University in Kalamazoo, MI. The winners will be granted a free two-year membership in Hagiography Society.

Students who are Hagiography Society members and enrolled in a graduate program (anywhere in the world) are eligible to apply if their paper, on a topic involving hagiography, has been accepted for inclusion on a regular panel (not a round table or other format) in the program of the International Congress on Medieval Studies in Kalamazoo, MI, at the time of application.  They are also expected to attend the annual Hagiography Society Business Meeting held at the International Congress on Medieval Studies

Please submit the following documents, combined in a single .PDF file, by 1 November to the Secretary / Treasurer of the Hagiography Society:

Successful applicants will be informed of the results by December 15.

We welcome contributions in any amount to the Sherry L. Reames Graduate Student Travel Award for Hagiographical Studies:

Past Winners for the Sherry L. Reames Travel Award

Lydia Walker, UT-Knoxville, “The Formulation of Female Holiness and Masculine Integrity: An Examination of Lutgard of Aywières and Jacques de Vitry” (2017-2018)

Mary Anne Gonzales, Guelph University, “Imitation and Feeling: Sorrow and Compassion in the Stigmata of Elizabeth of Spalbeek” (2016-2017)

Amy Devenney, University of Leeds, “‘You take the high road and I’ll take the low road’: exploring the experience of pilgrimage to monastic and civic shrines in twelfth century Apulia” (2014-2015)

Members have access to additional pages and resources. For more information on becoming a member, see our membership page for details.